The T46 and T46C pods swam into Puget Sound recently and we had great views of them on November 2 and 3 during our tours from Edmonds.

November 3 was pretty special because we found both of these pods within 20 minutes of leaving our dock in Edmonds.  It was a true highlight to see a brand new calf traveling with the T46C pod.  We saw the calf many times as it came up next to a number of different members of the pod.  It came up most often next to T46C (who is the suspected mother), but it also surfaced next to T122, T46C2, and T46C3.  We will await confirmation from whale researchers for the official word on who the mom is and then the calf will be given an alphanumeric ID from there.  T122 is a female that usually travels with the T46 pod.  Three big teenage males are in these two pods – T46C1, T46D, and T46E.   During most of our visit with these pods the three big males hung back from the bigger group of females and subadults that were surrounding the new calf.  T46E and T46C1 were spending a bunch of time together as a duo, and T46D was trailing closer to the females and young.  When we finally said goodbye just outside Elliot Bay, they were still heading south, deeper into Puget Sound.  We are hoping they will stay in Puget Sound for a while longer. 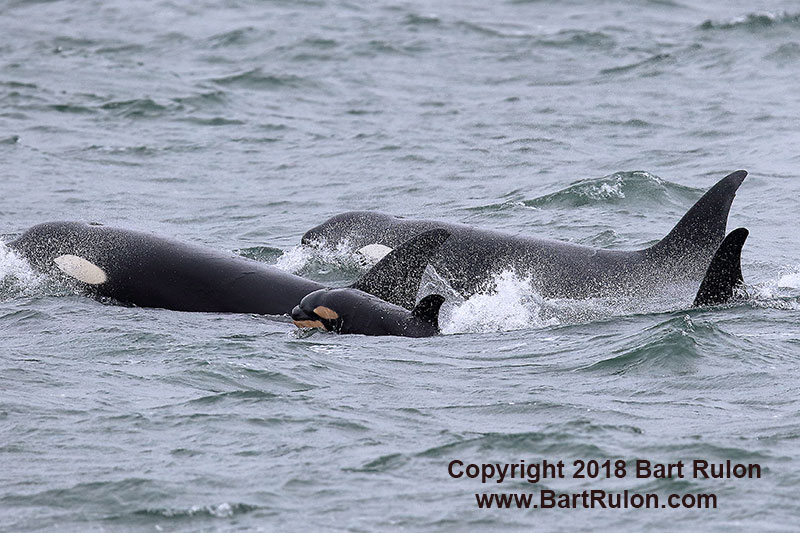 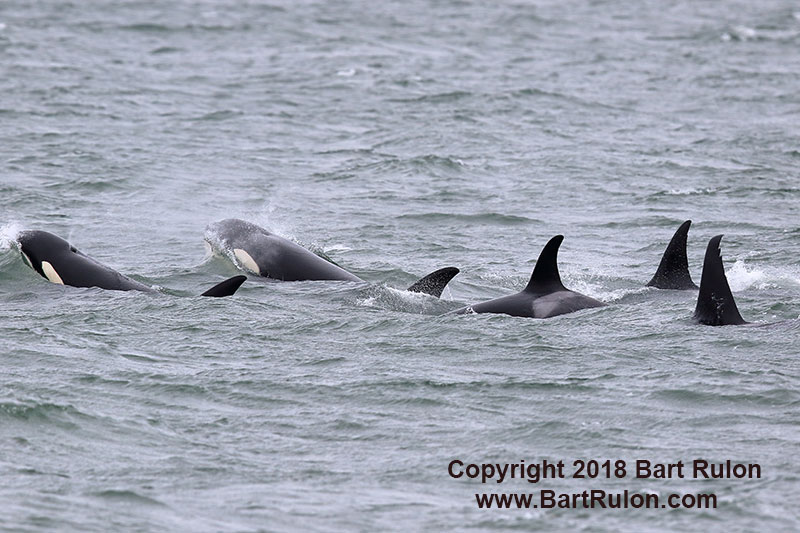 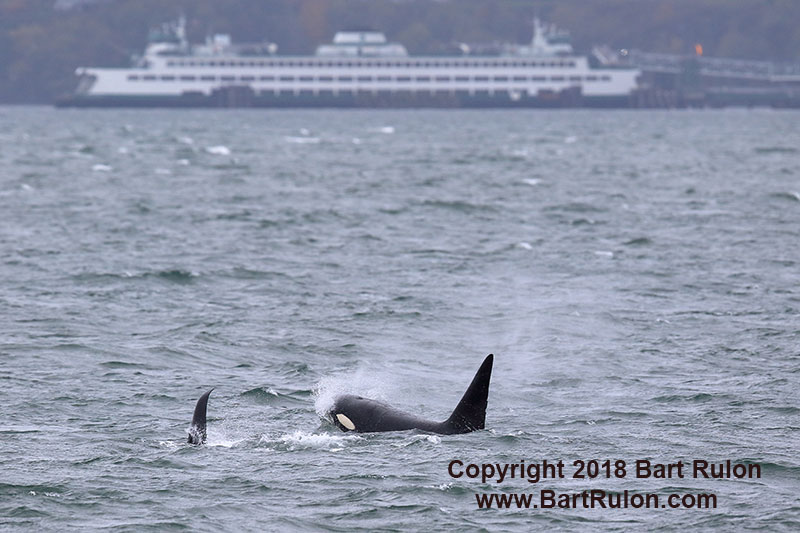 T46C1 surfaces with the Kingston ferry in the background, while T46E dives under next to him.

The day before, on November 2, we found the T46 pod swimming northbound in Saratoga Passage, battling 3-4 foot waves as they went.  In the middle of our viewing they managed to catch a meal and eat it quickly before they continued on.  We’re not sure exactly what they caught, but a few minutes beforehand we watched a California sea lion trying desperately to swallow a sand shark at the surface, right in their path.  The sea lion was getting mobbed by a bald eagle from above as he struggled to swallow it.   Its possible that the orcas made a meal out of the sea lion as he was trying to eat his meal (having no idea black and whites were coming his way).  The only thing the killer whales left behind after eating, that we could see, was the lungs.  Those were floating at the surface when they swam on.  It was pretty dramatic to see these transient killer whales crash high through the tall waves when they surfaced each time!  Bart Rulon, Naturalist, Puget Sound Express. 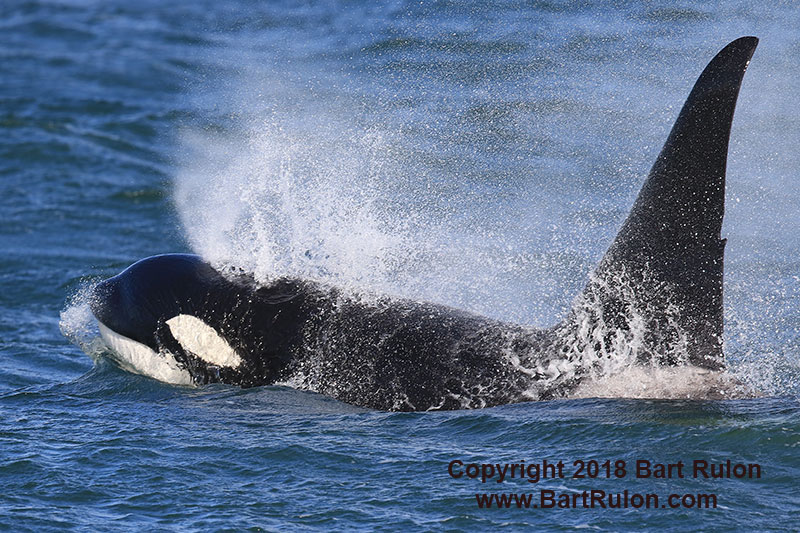 T46E crashes through the surf in Saratoga Passage on Nov 2 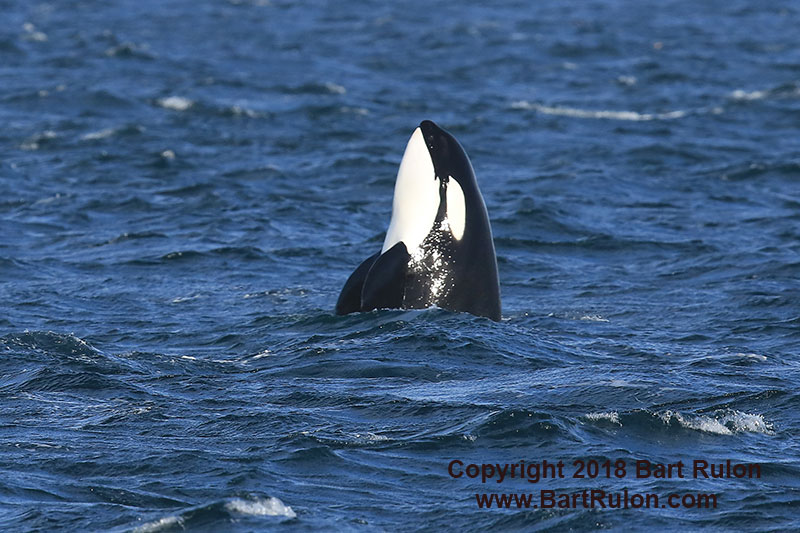 A big spyhop, probably from T46, after her pod made a kill in Saratoga Passage 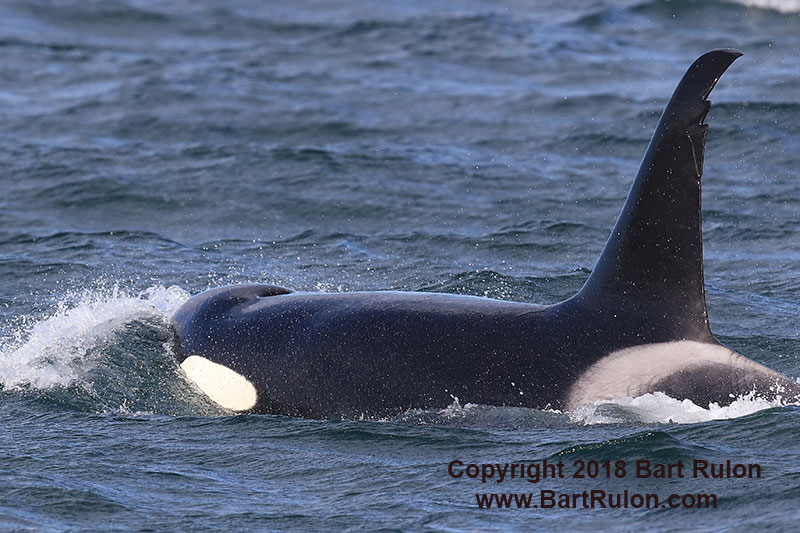 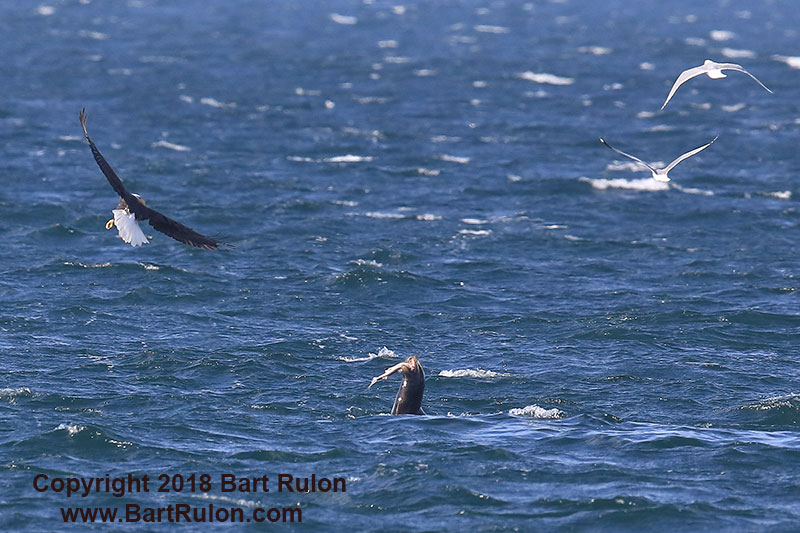 A California sea lion tries to swallow a spiny dogfish, while being harassed by a bald eagle and gulls, as the T46 pod swims his way!