On May 25, 2019, whale watching vessels from Puget Sound Express came across the T101 pod just west of Cultus Bay, south Whidbey Island. This is a unique Bigg’s orca (or transient) pod comprised of 4 transient killer whales, including a Mother, T101, and her three big adult male sons, T101A, T101B, and T102. The sons are 26yrs old, 22 years old, and 35 years old, respectively. 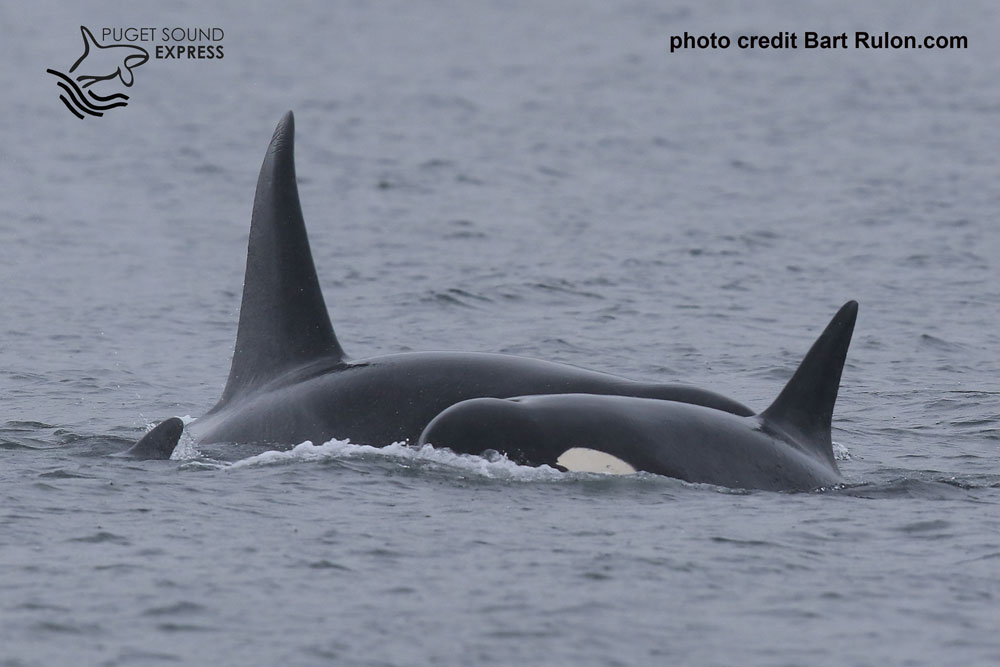 A flurry of action from members of the T101 pod right before the gray whale surfaced.

It was immediately obvious upon arrival (2:50 pm) that the killer whales were circling around some sort of prey. We had seen this same family an hour and 15 minutes beforehand (approximately 1:35) just a few miles southeast at Possession Point on our first whale watching trip of the day, and they were spread out in a typical hunting pattern as we departed the scene.

After watching the family circle around for quite a while, it wasn’t immediately apparent whether or not they were eating a meal yet or still following after it.  At times the pod would circle around tightly in the same spot and at other times they would swim off a little ways as if they might be following something that was slowly swimming underneath them.  At the 22 minute mark (3:12pm) We eventually saw a flurry of activity at the surface with the pod and then the body of a gray whale finally came up. The killer whales circled around the body as it floated and rolled a bit. Shortly thereafter a bunch of air with blood bubbled out of the gray whale carcass and then the whale slowly sank under the water again while the T101s continued to work on their meal.  The gray whale was at the surface for a total of two minutes before sinking back down (at 3:14pm).  Members of the pod did a few tail slaps, tail lobs, and a caudal peduncle throw (cartwheel) after the gray surfaced.  These are behaviors we often see during transient meals.  The pod was still circling around the carcass when we departed the scene at around 3:52 pm.  I found out later that my next door neighbor on the west side of Whidbey Island saw the T101 pod travelling northward, about 300 yards from shore, in between Bush Point and Lagoon Point, at 6:50 pm.

This is an unusual occurrence in our area to see a killer whale family feeding on a gray whale. We have witnessed half-hearted attacks of transient killer whales on some of our regular “Sounders” in the past but never have we seen an attack succeed. Its likely impossible to identify the whale from the pictures  we were able to obtain during the experience because so much of the skin was peeled off the gray whale. We do not believe the gray whale in question was one of our regular “Sounder” group of grays that regularly visits us in the spring time, partly because of the apparent smaller size of the body and because of the short amount of time it likely took the pod to kill the whale (less than an hour and a half). This is assuming they killed the whale and it didn’t pass away on its own beforehand.  Rulon had a conversation with Jessie Huggins, stranding coordinator at Cascadia Research Collective, the day after the event happened and she thought that the pod likely came across a gray whale that had passed away within a few days ahead of time.  The appearance of the sloughed off whale skin shown in the photographs was her main reason for that theory.  Jessie sees a lot of dead whales in her line of work.

This year we have seen an unusual amount of new, unidentified, gray whales showing up in the Salish Sea, and Puget Sound. It has also been a year with higher than usual gray whale mortality. It is speculated that the gray whale eaten by the T101 pod might have been a new unidentified gray whale that had been seen in the vicinity of Edmonds and the south end of Whidbey Island over the last week or two appearing to be sluggish, subadult size, and skinny.  Some of the gray whales and humpback whales that we see in this area regularly do have evidence of transient killer whale attacks on their tail flukes or pectoral fins from past attacks but there is no way to determine how long ago those attacks happened.  With the occurrence of more skinny gray whales showing up in the Salish Sea region it is always possible that this kind of event will happen again.  Photographer/Naturalist Bart Rulon. 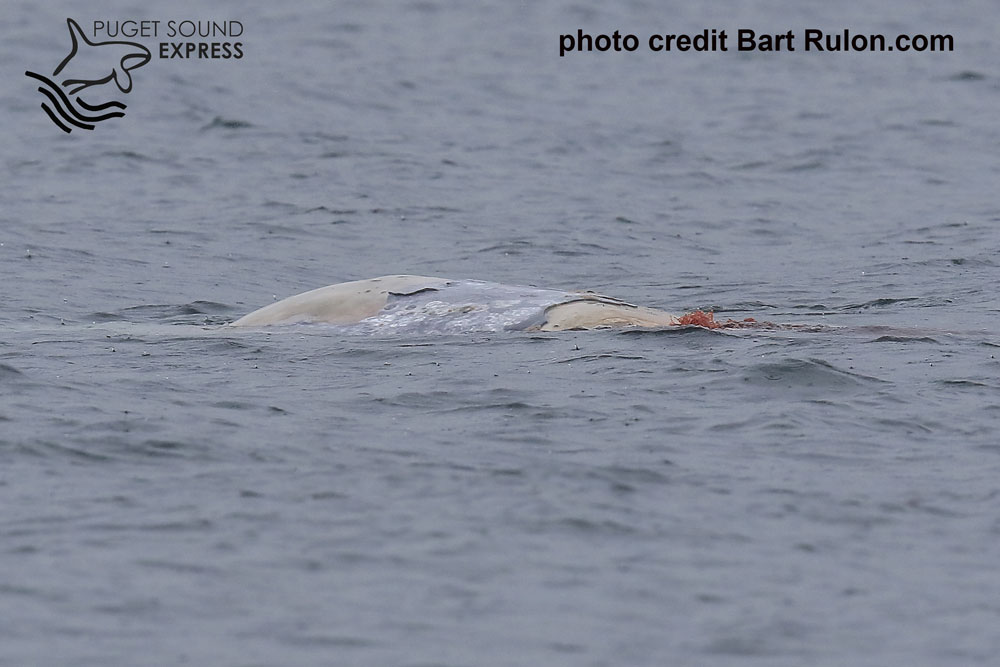 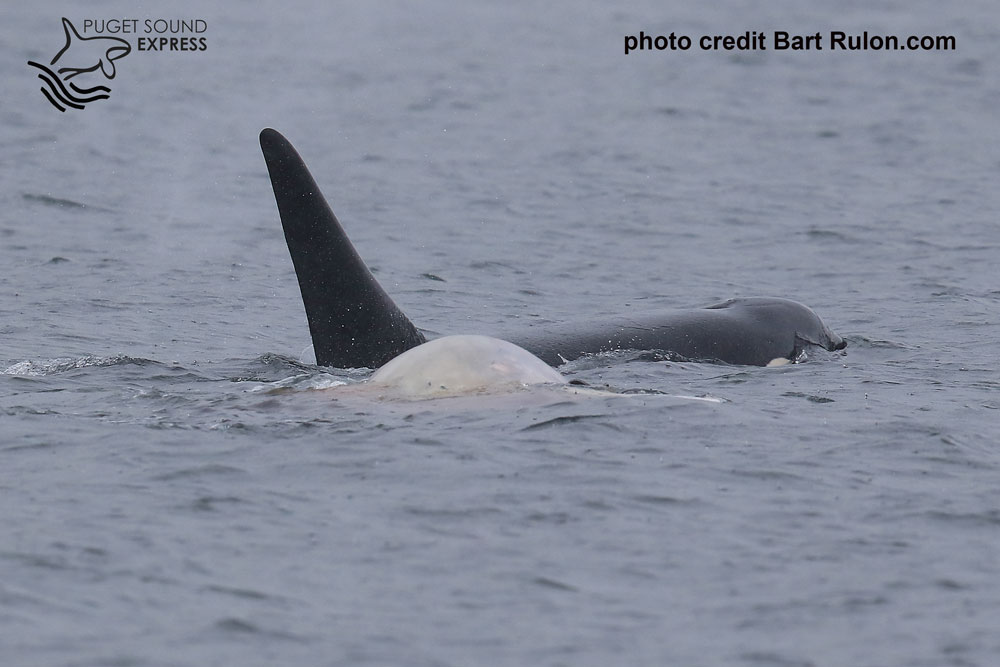 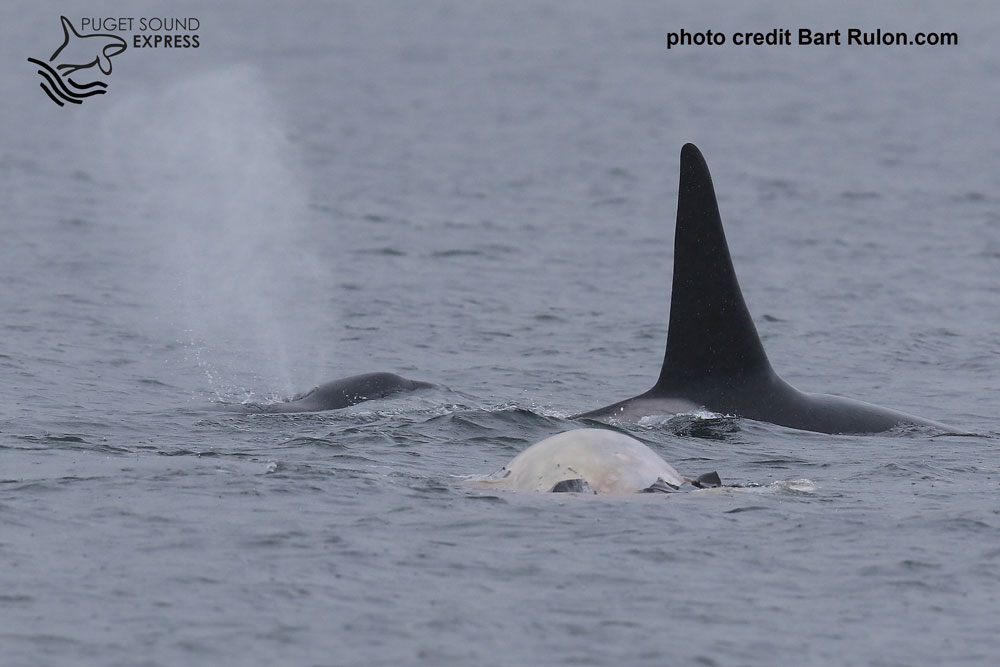 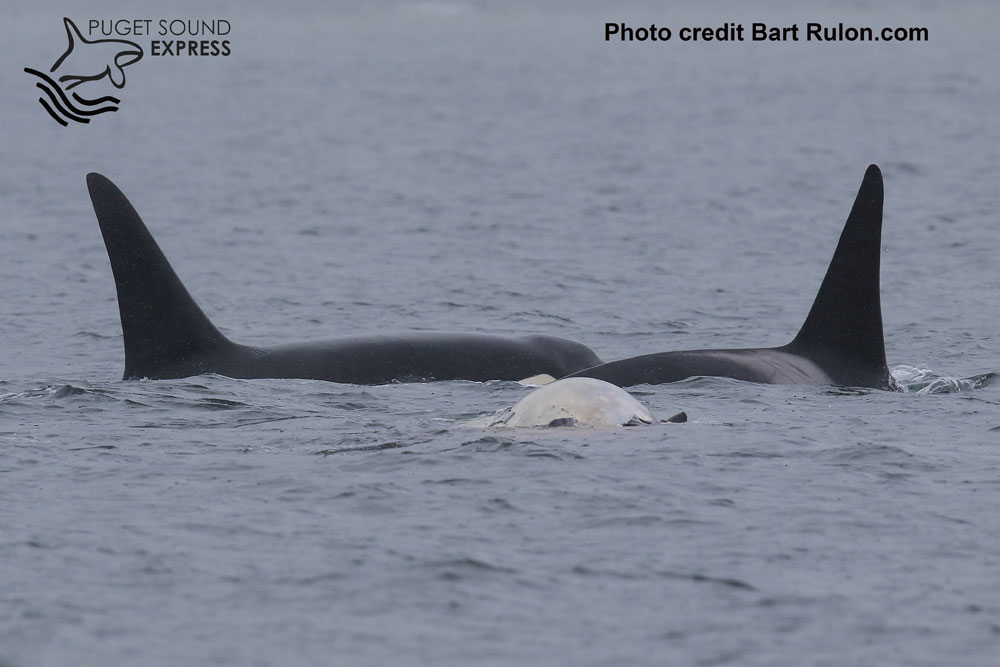 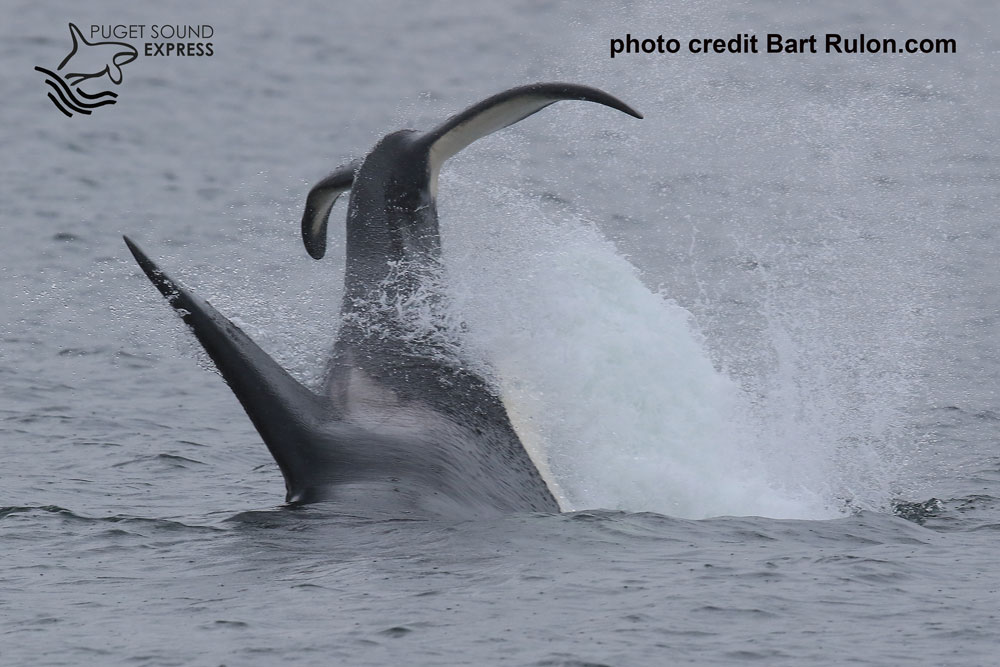 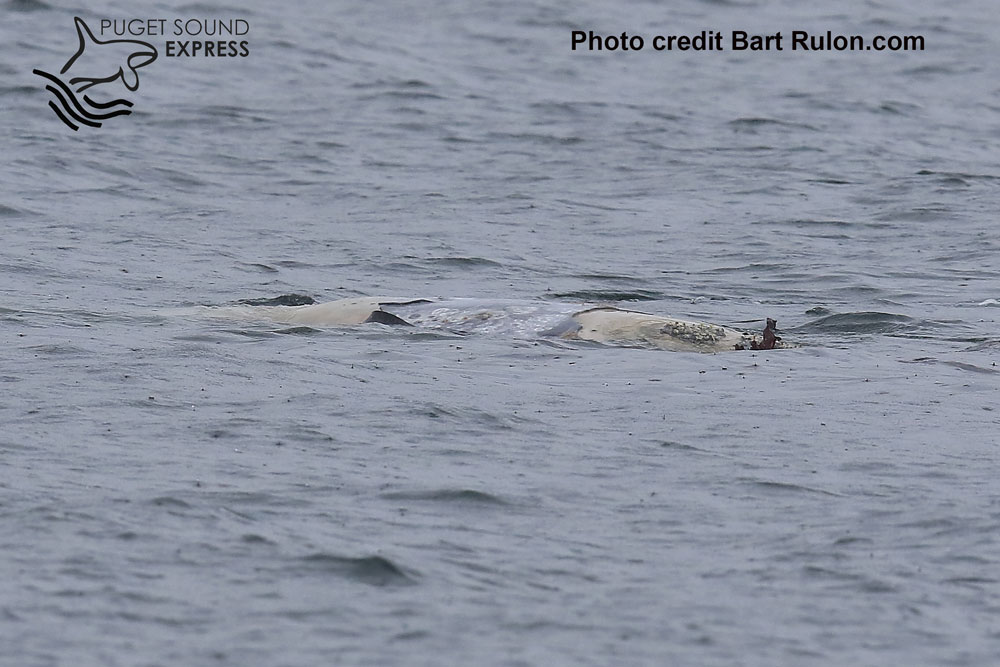 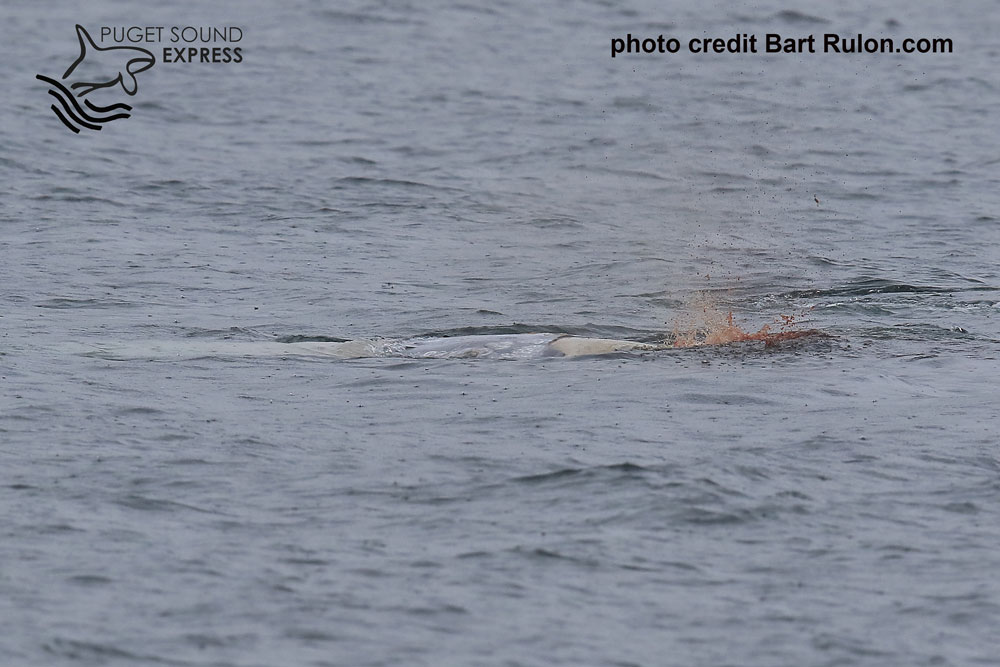 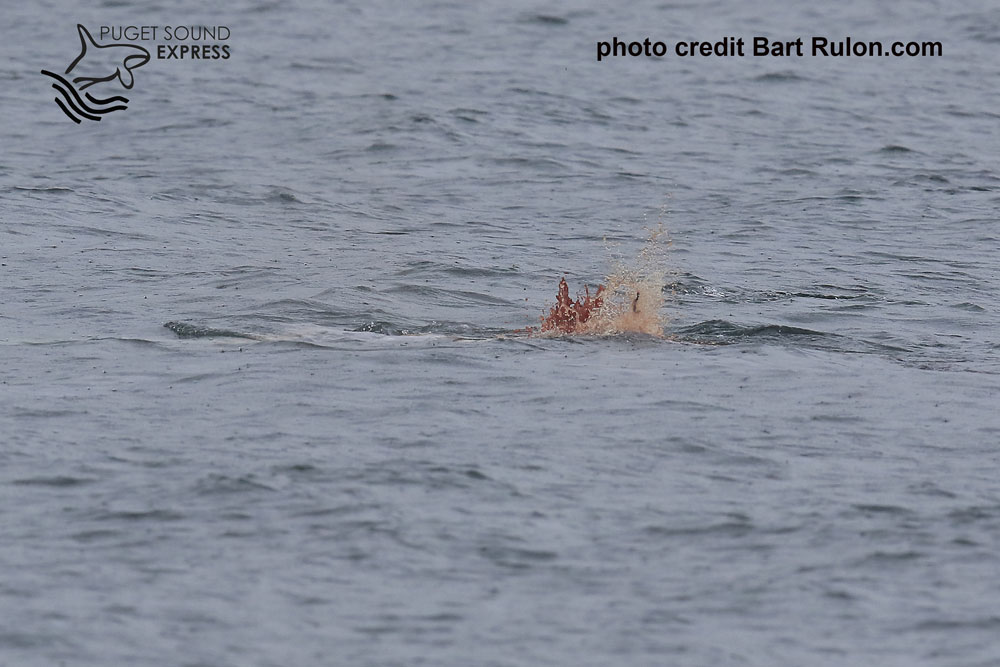 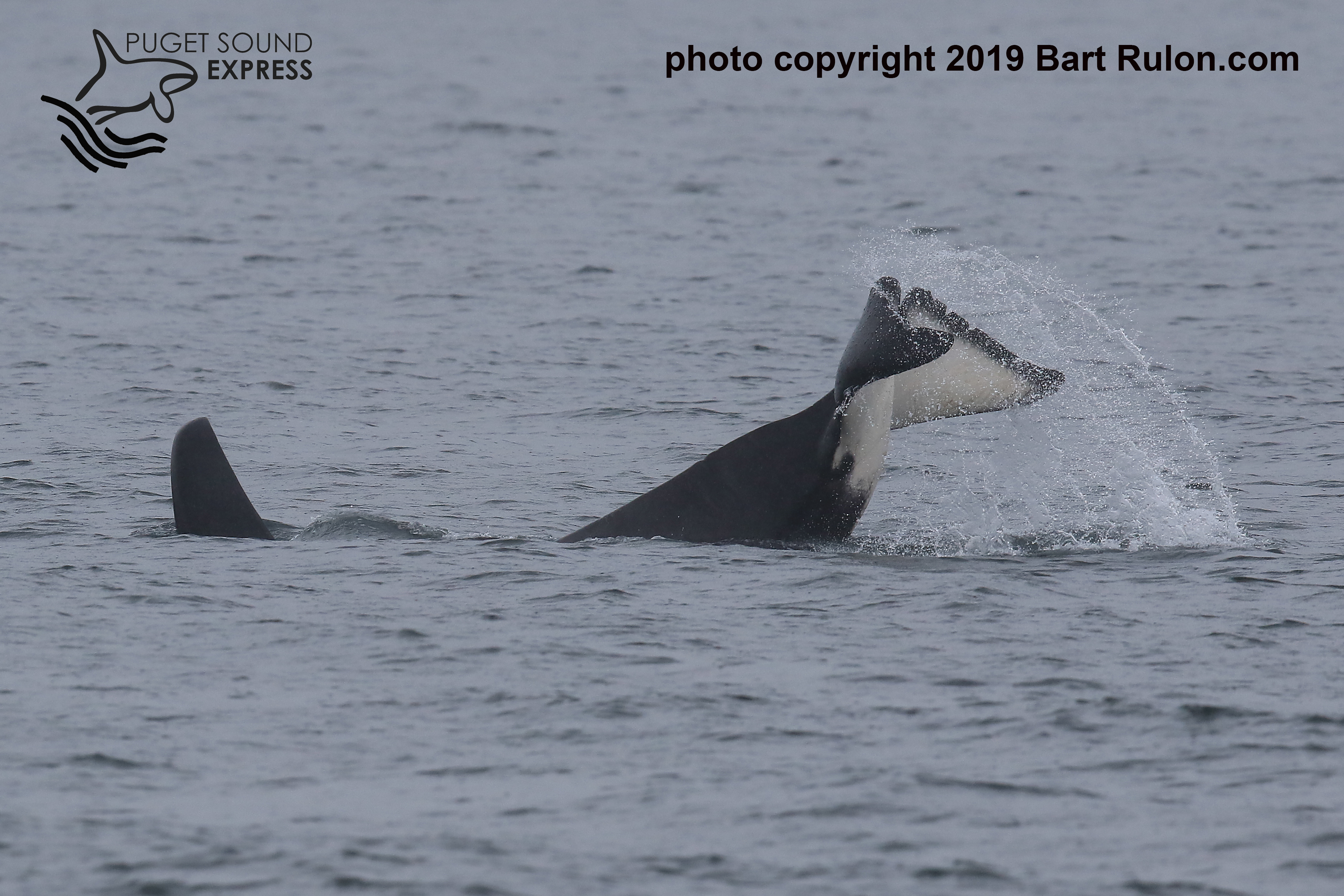 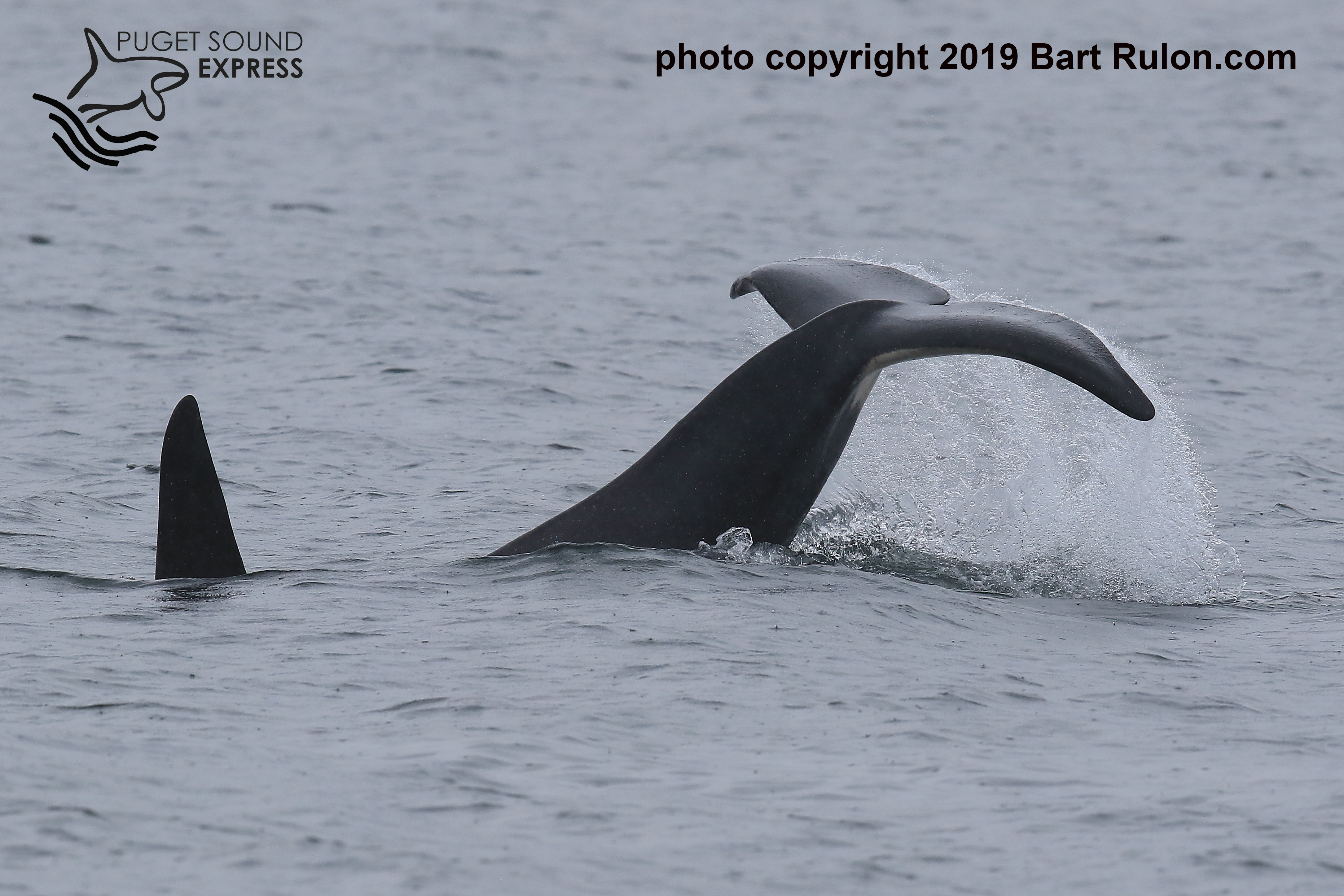 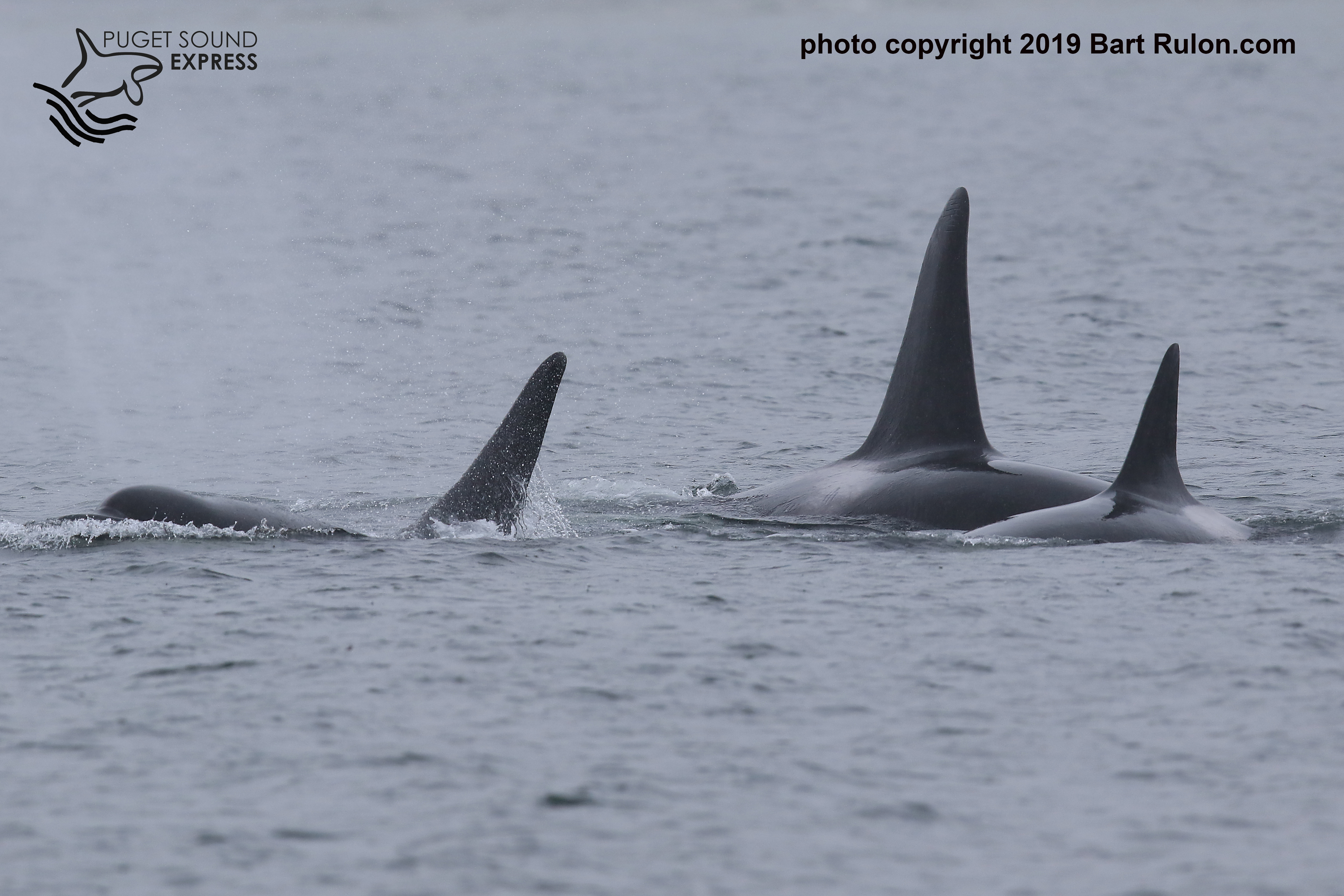