In case you didn’t know, humpback whales are making a mighty comeback in the Salish Sea.  We are seeing more humpback whales now than we ever have before in the whale watching field, and we are extremely excited about it!  2003 is when we just starting seeing a few more humpback whales showing up, but the increase is unmistakable now.  2017 has been another great year for humpback whales already, and we are seeing lots of active whales too.  Many of our sighting are in the Strait of Juan de Fuca, but some of our regular sightings have even been coming from Puget Sound.  Two particular experiences with these whales really stand out to me so I wanted to share them with you here. 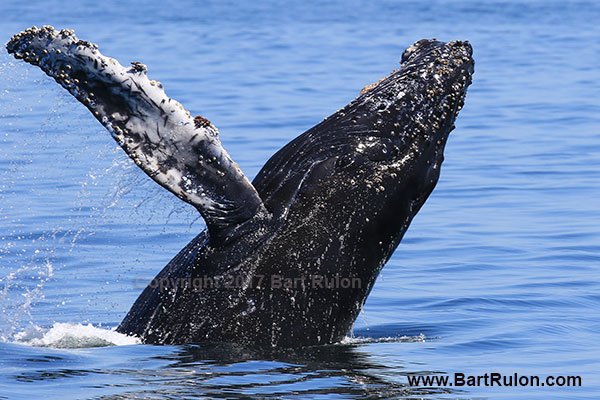 On June 24, we came across a mother and calf humpback whale not far from the Dungeness Spit, in the Strait of Juan de Fuca.  It was one of Captain Trevor’s first trips driving the Chilkat Express from Edmonds.  We could see these two whales breaching in the distance as we headed their way, and the acrobatics kept going when we arrived on scene.  Shortly after we arrived we realized that the mother whale was one of our regular favorites, Split Fluke, BCX1068!  She had a new calf!  This calf was an excited and acrobatic youngster for sure.  The calf breached over and over again for the entire time we watched them.  When mom decided to breach her incredible size, compared to the calf, was breathtaking.  In between breaches the two whales would slap their pectoral fins (up to 15 feet long on an adult) on the surface of the water over and over again.  At times it almost looked like the calf was mimicking her mother.  We have seen this kind of behavior with other mother’s and calves especially when they first arrive to our area from their long migration northward!  Puget Sound Naturalist, Bart Rulon 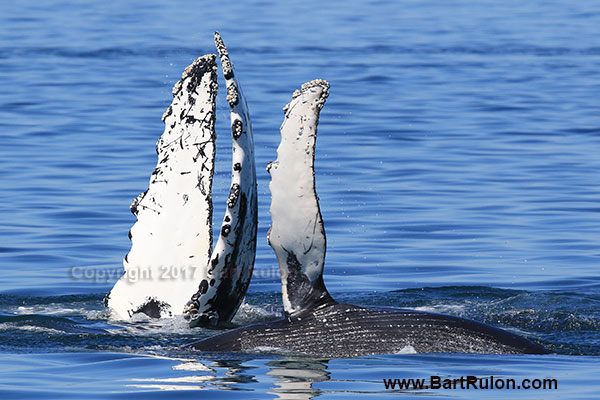 Another unique situation with humpback whales happened on the morning of June 28 within 20 minutes of our trip leaving the dock from Edmonds.  For a few weeks we had been seeing 1-3 humpback whales near Edmonds, and the south end of Whidbey Island at Possession Point.  One of those whales was a regular named Orion, BCX1251.  On this particular morning we spotted Orion swimming next to another, bigger, humpback whale that we had never seen before.  After we arrived the two raised their tail flukes for a deep dive together and within a few minutes one of the whales shot out of the water with a huge breach, and then followed it up with yet another!  Then we saw multiple head lunges, and head slaps, which often follow after a humpback whale breaches.  Next the whales started cartwheeling (peduncle slapping) right on top of each other!  At this point it looked like the whales were getting aggressive with each other.  We also saw the whales turn upside down and slap their tail flukes on the surface a few times and then they both just calmed down and continued to swim side by side.  Its interesting to note that I never saw that second humpback whale again after she had the encounter with Orion that day.  Puget Sound Express Naturalist, Bart Rulon 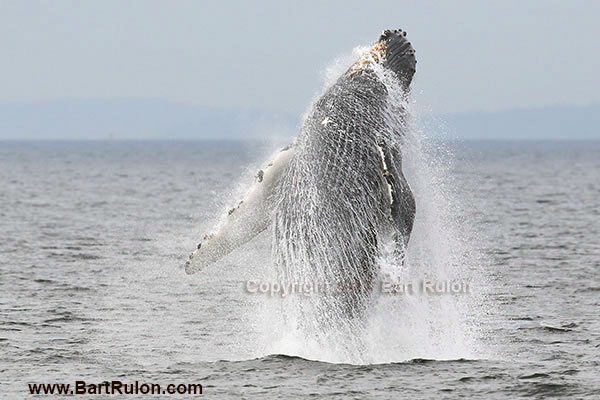 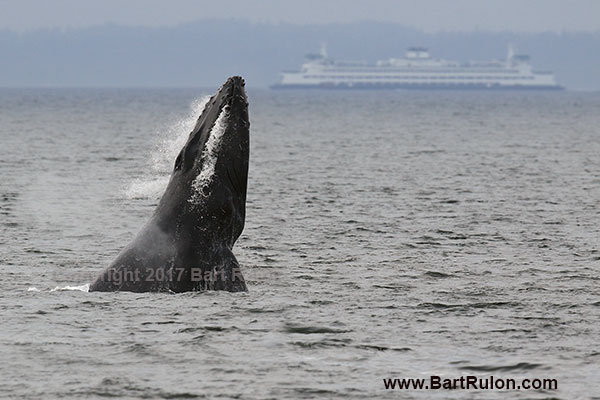