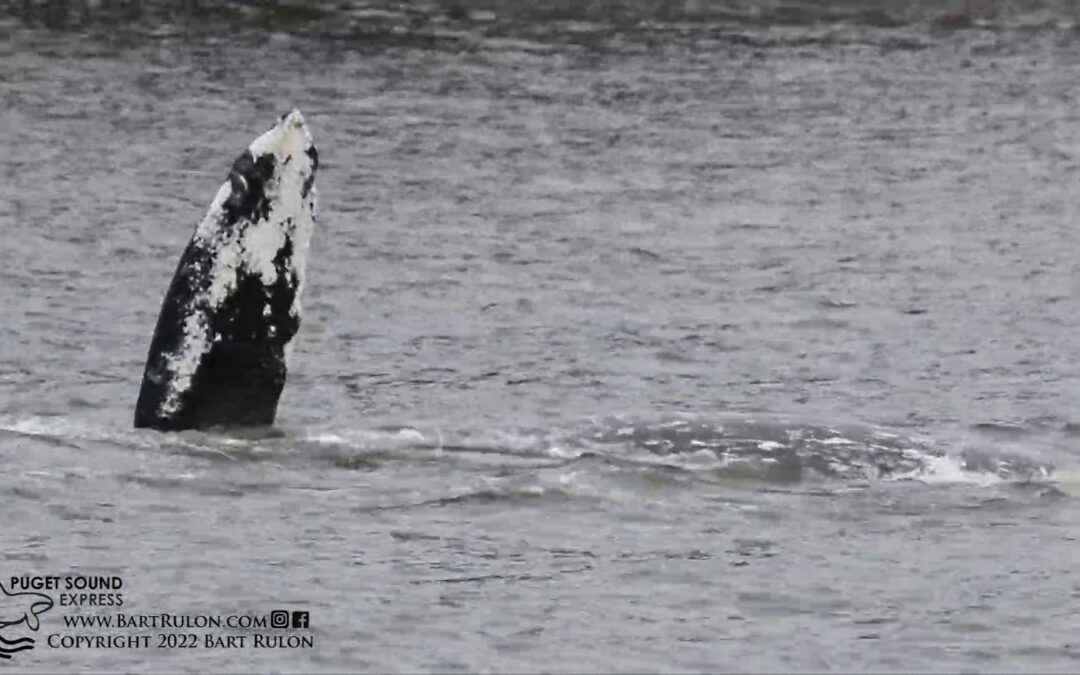 The gray whales we see here in March and April, the Sounders, employ a very unique feeding strategy that is definitely productive but also very risky. Gray whales are bottom feeders, and in Puget Sound they focus on eating sand shrimp, but they feed in much shallower water than most gray whales do. To access these 3-4 inch long crustaceans that live right on the sea floor the gray whales wait for the high tide to swim in and target the sand shrimp beds that are inaccessible at low tide. The risky part comes when they feed in water that is barely deep enough for them to swim in and they could get stuck! These gray whales arrive in our area very skinny from not eating while they are down in Mexico, where they do their mating and calving, but by the time they leave Washington to continue their northward migration they are significantly fattened up!

Recently our passengers on the M.V. Saratoga got front row seats to see just how they do it near the shores of Camano Island. The video below shows two gray whales feeding in water that is so shallow that the biggest of the two giants can’t even get her body totally submerged as she tries to swim out to deeper water. In the beginning of the video you will see gray whale crc531, a confirmed female, roll over on her side and her pectoral fin sticks straight up in the air as she feeds. After she rolls back over, the pectoral fin from gray whale crc383, a confirmed male, comes out of the water as he feeds right next to her. Believe it or not, most gray whales tend to be “Righties”, meaning they prefer to bottom feed on their right sides. Eventually this duo swims out towards deeper water, but notice that the back of 531 is exposed the whole time, meaning that her belly is probably scraping right up against the bottom as she goes. At the very end of the video 383 raises his head high out of the water in a maneuver we believe might be used to help them sift the sand and mud out of their mouths through the baleen plates, leaving only the food inside.