Yesterday was a big day on the water. Puget Sound Express passengers got to see a rare encounter between gray whales and orcas. Details of the encounter were shared by Kitsap Sun writer Christopher Dunagan, and photos were posted on Flickr by passenger Patrick Downs.

Captain Erick Peirson was attempting to locate two adult gray whales traveling with a younger gray. Instead, the crew spotted a group of transient orcas.

Apparently, the male orca had completed a long dive underwater, coming up right alongside the grays.

“I saw a lot of splashing and churning of the water,” Peirson said. “The male killer whale’s fin was slicing into a turn. In the middle was a gray whale fluke.”

It was clear, he said, that the two adult gray whales had quickly positioned themselves in a defensive posture, one on each side of the younger gray whale.

“The male killer whale rubbed up alongside the biggest gray whale,” Peirson said. “The gray whales were logging at the surface, just sitting right there. We thought the killer whales would go in for the kill at that point.”

Instead, the orcas broke away. “We next saw the killer whales in the distance heading to the north.” 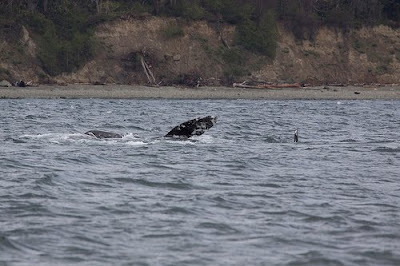 See us in action!