What a fantastic day on the water! Despite a few blustery spells the spring season has mellowed into sunshine and calm seas. We were excited to take advantage of both on Wednesday, and boy did it pay off!

The day had a rather unusual start. At around 0830 I got a call from Howie at Orca Network who said that a gray whale had been spotted in Admiralty Inlet, that there was some concern that it might be dead or ailing, and that he wondered if we could swing over and take a look on our way to Possession Sound. Over the past few weeks we have been enjoying the company of a handful of gray whales who have stopped in on their annual trip to their northern feeding grounds. On March 30th we observed an encounter between mammal-eating (or “transient”) killer whales and a group of gray whales, and those encounters seem to have been intensifying. Multiple gray whales have died in the past two weeks, and although it cannot yet be confirmed that killer whales were involved there is considerable speculation.

About 12 minutes off the dock we encountered (what we believe to be) the same large gray whale just north of Admiralty Head. The animal was clearly alive, taking some long dives below the strong ebb current. We shut down or engines and rode the tide. After a few minutes of watching we began to understand why the animal might have been mistaken for dead: it came slowly to the surface and, rather than dive again, simply logged there for ten breaths or so. As she lay there she would arch her back, then raise her head and tail flukes high out of the water, then arch again. 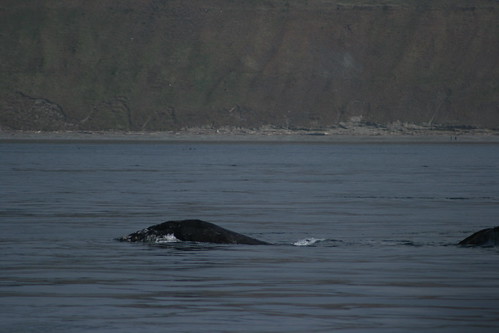 We passed the report back to OrcaNetwork, and took a few pictures so that they could identify the animal, before turning south to continue our trip toward Possession Sound. We left her swimming northwest toward the sea, continuing her annual journey to the northern reaches of the Pacific.Less than 30 minutes later, however, a column of mist caught my eye near the south tip of Marrowstone Island. It was a pod of killer whales (pictures)! We approached carefully, as this mammal-eating variety of orca can be quite elusive (and has been known to vanish suddenly). 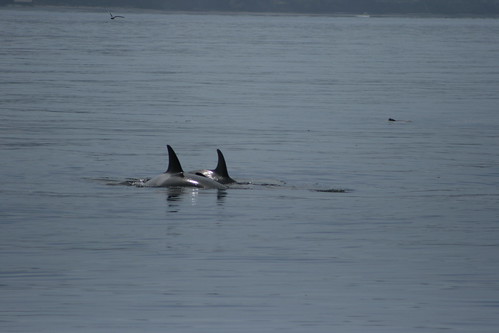 In the photo above you can see the mammal-eating killer whales stalking a male steller sea lion (upper right), who is meanwhile taking on a huge flounder! The calm, clear weather allowed us to sit with our engines off during the entire encounter, watching from a respectful distance so as not to interfere. The group of 5 orcas spent at least 30 minutes circling the sea lion before moving on toward Hood Canal, to the south. We have seen larger groups of killer whales spend over six hours on a single steller, so this group likely decided to look for easier prey. 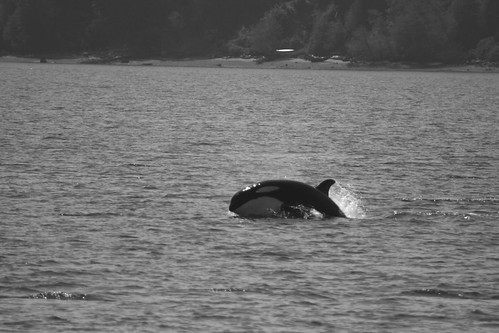 Which they found quickly! The orca above is in hot pursuit of a harbor porpoise at the entrance to Hood Canal. Just like a pack of wolves, the orca pod worked together to entrap the animal, and shared the meal once it was captured. We left them swimming north, back into Puget Sound, celebrating the successful kill.Photographs of the dorsal fins and saddle patches (the white pigmentation below their dorsal fin) of these killer whales have been passed on to OrcaNetwork for identification, and we’ll update this post once a determination has been made.

See us in action!